Oxford September 24th, 2020. The link between a specific genetic marker and severity of non-alcoholic fatty liver disease (NAFLD) has been validated in this study by researchers from several institutions and organisations, including Perspectum and the UK Biobank. This will help to better identify individuals at increased risk of more advanced forms of the disease.

NAFLD is the accumulation of fat in the liver, which can lead to inflammation and scarring. The exact cause of NAFLD is unknown, but it almost always occurs alongside obesity and diabetes. NAFLD reportedly affects around one in four adults in the United States and Europe [Younossi 2019] and by definition occurs in people who do not regularly drink excessive amounts of alcohol. Identifying genetic associations with NAFLD has important clinical implications; it can improve understanding of hepatic metabolism and facilitate the development of drug targets for NAFLD. However, this can be challenging because enormous amounts of data are needed to show that a specific genetic variant is linked to a particular disease or condition. 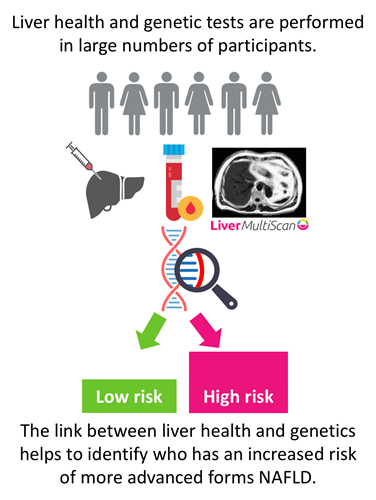 This latest research looked at the results of 42 different genetics studies, which included more than 1 million participants, and confirmed that a specific genetic variant (known as “rs641738C>T” near the gene “MBOAT7”) is positively associated with more advanced stages of NAFLD in individuals of European descent. This genetic variant is carried by about 40% of all people but this study suggests that it causes risk if the individual has two copies of the genetic mutation, which occurs in about 17% of people. The data collected for each participant comprised liver histology, blood tests and imaging markers of liver fat such as that measured by Perspectum’s LiverMultiScan®, IDEAL MRI-PDFF. These significant results prove that specific genetic factors contribute to an individual’s risk of developing NAFLD. It should be noted that this genetic association was found only in studies with individuals who self-identified as Caucasian. Moreover, the authors noted a substantial lack of genetics data from non-Caucasian populations, which is recognised as an issue within the field.

This study and its findings emphasise the power of collaborations and how access to huge quantities of accurate data, such the UK Biobank population and liver fat measured by LiverMultiScan, can help to identify genetic markers of liver disease. Together these will help to enhance understanding of the mechanisms behind NAFLD and find new ways to tackle this widespread disease. This research also demonstrates the utility of LiverMultiScan in large-scale population imaging with advantages of being fast, easy to do, not using radiation and not being prohibitively expensive.

Dr Jake Mann, senior author of the study and Visiting Clinical Fellow at the Medical Research Council (MRC) Epidemiology Unit, University of Cambridge, commented, “It is important to definitively establish which genes (and genetic variants) are (or are not) associated with specific conditions. This project required huge collaboration; without the contribution of scientists in many countries and institutions, we could not have reached these conclusions. Whilst the clinical applications of this work may be some time off, we hope these results will make a contribution to the science that underpins drug design and development.”

Find out more about LiverMultiScan here.

Institutes involved in this research included the Medical Research Council (MRC) Epidemiology Unit, University of Cambridge, the NIHR Newcastle Biomedical Research Centre, as well as Perspectum and many other collaborators from around the world. The study was supported by the National Institute for Health Research (NIHR).

About the MRC Epidemiology Unit

The MRC Epidemiology Unit is a department at the University of Cambridge. It studies the genetic, developmental and environmental factors that cause obesity, type 2 diabetes and related metabolic disorders and the development and evaluation of strategies for the prevention of these diseases in the general population. www.mrc-epid.cam.ac.uk

About the Medical Research Council

The Medical Research Council is at the forefront of scientific discovery to improve human health. Founded in 1913 to tackle tuberculosis, the MRC now invests taxpayers’ money in some of the best medical research in the world across every area of health. Thirty-three MRC-funded researchers have won Nobel prizes in a wide range of disciplines, and MRC scientists have been behind such diverse discoveries as vitamins, the structure of DNA and the link between smoking and cancer, as well as achievements such as pioneering the use of randomised controlled trials, the invention of MRI scanning, and the development of a group of antibodies used in the making of some of the most successful drugs ever developed. Today, MRC-funded scientists tackle some of the greatest health problems facing humanity in the 21st century, from the rising tide of chronic diseases associated with ageing to the threats posed by rapidly mutating micro-organisms. The Medical Research Council is part of UK Research and Innovation. https://mrc.ukri.org/

About the University of Cambridge

The mission of the University of Cambridge is to contribute to society through the pursuit of education, learning and research at the highest international levels of excellence. To date, 109 affiliates of the University have won the Nobel Prize.

Founded in 1209, the University comprises 31 autonomous Colleges and 150 departments, faculties and institutions. Cambridge is a global university. Its 19,000 student body includes 3,700 international students from 120 countries. Cambridge researchers collaborate with colleagues worldwide, and the University has established larger-scale partnerships in Asia, Africa and America.

The University sits at the heart of the ‘Cambridge cluster’, which employs more than 61,000 people and has in excess of £15 billion in turnover generated annually by the 5,000 knowledge-intensive firms in and around the city. The city publishes 316 patents per 100,000 residents. www.cam.ac.uk

About the National Institute for Health Research (NIHR)

The National Institute for Health Research (NIHR) is the nation's largest funder of health and care research. The NIHR:

Funds, supports and delivers high quality research that benefits the NHS, public health and social care
Engages and involves patients, carers and the public in order to improve the reach, quality and impact of research
Attracts, trains and supports the best researchers to tackle the complex health and care challenges of the future
Invests in world-class infrastructure and a skilled delivery workforce to translate discoveries into improved treatments and services
Partners with other public funders, charities and industry to maximise the value of research to patients and the economy

The NIHR was established in 2006 to improve the health and wealth of the nation through research, and is funded by the Department of Health and Social Care. In addition to its national role, the NIHR supports applied health research for the direct and primary benefit of people in low- and middle-income countries, using UK aid from the UK government. https://www.nihr.ac.uk

This work uses data provided by patients and collected by the NHS as part of their care and support and would not have been possible without access to this data. The NIHR recognises and values the role of patient data, securely accessed and stored, both in underpinning and leading to improvements in research and care. www.nihr.ac.uk/patientdata